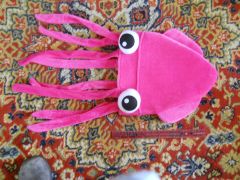 Check out my squid hat and socks!! Gotta be properly dressed for maximum catches. Of course some people run from the docks when they see me in the hat!! 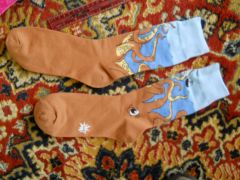 I started squid fishing last year and not a master like other guys.

I use a fishing set for beginners bought in walmart and jigs & 20W light bought in Amazon.

I went to GI bridge at 11 p.m. on last Friday. There were about 20 people on the bridge.

It was sunny and full moon.

I caught 17 squids in 3 hrs. Other guys caught much more, but 17 squids are enough to eat with family.

(2) Ink spots on the road show the good position

(3) squids are in the bottom and squids bite your jig while jigs are falling, not pulling.

(4) Keep Clean around the sea!

Bristol was hot but last night the cops came down and kicked everybody off both town piers for fishing the private float docks.boats were getting inked and trash was being left behind as well as pot smoking and alcohol use.i wasn't there personally but received a call from a friend as soon as it happened.only a handful of locals with parking permits were allowed to stay in the parking lots.if anyone is planning to head there tonight beware of the posted signs now that they've been there they will b back every night unfortunately.just park on the main road and fish the main dock.not worth getting tagged and towed for squid.

#26567 Trying to set up a basic newbie rig for squid fishing.

Hi mate first of all I think the rod you are using is a bit to short if you are fishing landbased. You need a longer rod to cast out those jigs far enough say about 8'6". A good starter rod to get would be a Rovex EGi Squid Wrangler Rod made by Jarvis Walker and they are pretty cheap to. As for the reels and line get a 2500 reel loaded with a good quality braid from Japan say about 10-15lb would be good and leader go about 10lb flurocarbon leader. The reason I say get braid is you have more feel and better casting. As for your jigs visit this guy www.worldfishing.com.au he has high quilty jigs for very cheap. I hope this helps and good luck with your squiding adventures Remember, early spring the water temp is still cold.  Look for places where water is warmer.  Somewhere near your famous squid spots.

Wednesday the 8th fished for about 8hrs and managed a little over 70 ranging from medium to large, 12-15

Personally I don't really care for a lot of lights,and I don't like those underwater greenish light tubes. I have often caught many more squid fishing in a dark spot of a dock while others were using bright lights on another place on the same dock and caught few. I have slain many in total darkness. I do like lighted docks, and quite often do best jigging where the light "edge" is rather than directly under the lights. I am largely a dock fisherman and do understand that boats use lights with great success, but when dock fishing I prefer a little light to a lot of light. Janz is right about color, whatever they are hitting is the best color. If I only had two jigs to fish with I would carry a long discontinued Martinetti wood body jig with an orange back and white belly and a white smooth body (no cloth cover) Yamashita Naory Range hunter 1.8B also no longer available in this country. I also don't believe an overcast sky is better than a sunny sky when daytime squidding, I have caught thousands under a bright sun, when they're there and hungry they don't care about the sun. There are also "stick" jigs made from a short piece of 1/4 inch plastic tubing about an inch to an inch and a half long that work very well sometimes, usually in white or milky translucent plastic. Colman's Squid Jig Warehouse sells what they call a "bullet head" jig which occasionally will out fish the shrimp/prawn style jigs and are a must in one's arsenal, and the usual colors of white, pink, orange, and green often work best. When fishing the smaller prawn style jigs four pound test line with a tiny snap (no swivel) on a tiny sensitve rod will out fish all other rigs. (this is for single jig fishing here in the northeast) When I started squidding forty years ago there were no modern prawn type jigs and we used a 1/4" by 1&1/4" piece of dowel rod with a screw eye on each end and a small treble hook on one end and the dowel was painted white, and we caught thosands with this simple rig. Occasionally I see an old timer still fishing this way and doing well although I hardly ever use one.

Squid are in at The Vineyard.
A little over 200 pounds by two of us. Usually we only need one trip for the squid we would have enough.

Very nice post K.O.! It is hard to tell how big your jig is in the photo, but it looks a little large to me. I prefer jigs around 3" total length, they usually seem to out fish the larger ones. I also use four pound test flourocarbon line which is almost totally invisible in the water. A small very sensitive rod also helps you feel the light touch of the loligo squid. When they are hungry and aggressive any jig will do, but when they are finicky you will find the smaller jigs and thin line work better. You don't need to put all thin line on your reel, you can put just 50' or so on to do the trick. The thinner line is also less wind and current resistant. I agree that the peak was and often is in early June for the spring run. I'd like to see "sunny and full moon at 11PM" sounds like fishing around the arctic circle in the land of the midnight sun!! Tight lines and an inky bucket!!

Never wearing light color squiding again!----"If you get cranky without your silk hanky you'd better steer clear of the squid jigin" grounds!" A line from a great song called "Squid Jiggin' Grounds" by Ed McCurdy. If you guys haven't heard it you can find it on youtube. It's hilarious!! One verse:

Says Bobby the squid are on top of the water, I've just got my jigger 'bout one fathom down

When a squid in the boat squirted rigght down his throat

And they're swearin' like mad on the squid jiggin ground

This season is not over yet boys.  I think the heavy squid numbers will be in this weekend.  I went on Monday under the Newport Bridge and at around 12:30AM.  The bite was heavy, it lasted for like an hour and a half.  Big tubes.  But it was really windy condition, and I was too tired to add more jigs to my rig.  I was using 3 classic squid jigs and a sinker.  I fished the bottom using this rig.  I also used the the coleman jigs seen from the photo below.  I let it go 10~15ft slow sinking..and got big tubes jigging this way too.  Go out there boys..season's still in full swing..I am going tonight..hope you see more boats out there... 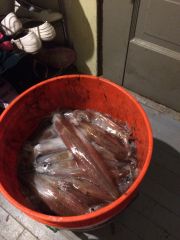 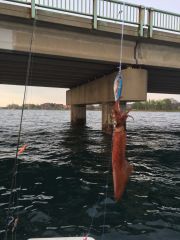 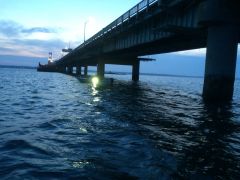 Went out with FF last night.  Left the dock at 7pm and returned at 12:30am   Was still light when we started

and fished for 1 1/2 hrs before it got dark enough to turn on the lights.  not a single squid was caught during

that time.  Once dark enough it was a very slow pick of mixed size tubes.  Towards the end there were some

at the surface but very hard to get them to take the jig, they liked to look at it.   I caught exactly 20 squid for

the night.   Best on the boat was not much more than that.   Even numbers of small med and large tubes.

Pink and crystal clear were the best colors.   Most squid came on the top jig that was about 3-4 feet above

the bottom jig.   But if you tried to fish that zone keeping your weight off the bottom got no takes.  Got 3 at

the surface doing the figure 8 with top jig just under the surface.  One double for me the whole night.  There

were squid there just not concentrated in numbers like last year, heard every excuse in the books as to why

its like that.   Mostly 2' waves then some rain and then flattened right out, but was cold.  Met an angler who

visits the forum but doesn't post.  Should have been there Wed night, story of life.

I thought the new moon was the best time? went sat night in Newport and only had 3 come over the rail and into the pail all on a green yo-zuri. saw plenty of schools pass right through our light but they must have all been female because they couldn't make a decision about whether to eat or not

Here is my report.

Finally Saturday is here.
We got to Hyannis at 12:00 pm
There were many boats out there. We started fishing but it was slow going pretty slow, may be half a bucket in two hrs.
I though that it's going to be bleak for sure.
Then all in a sudden 3:00 pm it was a blitz, major biomass of squid we could not catch up with the bites.
By 6:45 pm we filled a hundred quarts cooler and 1 1/2 buckets.
We have to leave because of the heavy fog couldn't see more than 20 feet in front of us.
The bites was still good but fog make it too dangerous to stay and it was getting dark.
Yeah the squid are still in Hyannis.
We got enough squid for food and bait for the year.
So the rest of you still have not get your quota go for it.
Here are some pics. I just checked the water temp. in Nantucket Sound and it is 44.6.  Does anybody know where is the squid migrate from?

You can draw an idea from these charts (these are for ilex squid):

$17 is too much!! Tomo has Naory RH 1.8B warm jackets for 12 bucks. How much were they at Lucky's? I was at Ocean State last year and he did't have much in the way of Yamashitas and he was higher in price than Lucky or Tomo. What's the white chin? I have a white one with a red head area that worked well last fall, but I tried several different Naorys in size and color and they all did equally well. I could only get the Naory 1.5 (the little one) in the light weight last year and although it took forever to sink it definitely slew the squids. Tomo also sells the nifty jig hook covers that are fantastic as you can keep a bunch in your pockets without them snagging on everything. There are pics of these cool little gizmos in my gallery here if you wish to see what they look like. (click on my user name and go to "gallery") got 5 pounds fishing at 69 last night! Despite the muddy water, gotta use orange jigs to penetrate the mud so the squid can see your jigs! Most luck with an orange jig than the others I had in my box! The bite has been sucking because of the Full Moon. It sweeps the bait and squid in and out. The currents are too strong the baitfish and squid are more spread out. The New Moon always supplies the best bite.