31 replies to this topic

lol yeah any graphic artists out there? i will look into how much it costs to get them printed etc. thanks for the idea.

you wouldn't know any sticker printers in melbourne would you? :geek

Nah, sorry Glen. Dont even know where to get it done in Adelaide!!!!

Yeah stickers would be cool i would buy em for sure stick em on the pier, my boat, if i was old enough to drive i would stick them on my car! haha

[/I]Fish whenever you get the chance!

here is the latest stats for squidfish.net. The data for October 2004 was lost unfortunately.

yes i think january has been a good month. those stats were taken on 26 January so i reckon by the end of the month it might have the largest number of visitors ever. i think we might go over 20,000 visitors for the first time.

i mostly focus on "visitors" rather than "hits" because hits can be quite misleading. of the 373,652 hits that we received in the month up to 26 January, a lot of them will be from search engines like google and MSN. so that is why i only really pay attention to "visitors". Of course a few of the visitors will also be search engines but its a fairly small number.

i said last year we were hoping to get to 30,000 vistors per month by the end of the year and we didn't quite reach that target. though i think 2005 could be the year! I have a few plans for the site to increase the amount and quality of information. And to make the information more easy to find. You may have noticed that we are increasingly getting questions on the fourms that have been asked many times before. The problem of course is that the answers to the questions is often not that easy to find unless one is very good at using the search facilities on the forums and on the squidfish homepage (i.e. a google powered search that is supposed to search the entire site).

Stay tuned, I believe 2005 will be a very good year for squidfish.net. It will also be the squidfish forum's 5 year anniversary (which began in Oct 2000).

We are slowly edging toward the 30,000 visitors per month target that I was discussing last year.


In July 2005 we had 27,367 visitors. Funny how the number of visitors has increased and yet the forum has been fairly quiet lately...maybe we are getting very quiet visitors???!!! 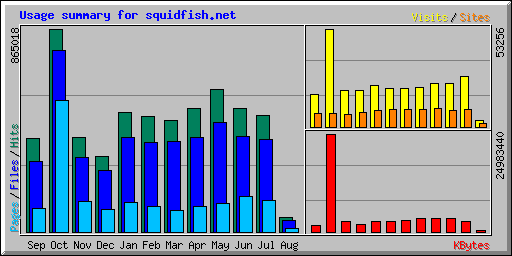 Glen from my expirience with other sites people mainly visit sites for seeking just information and many are reluctant to post. either they have found what they are looking for or in a lot of cases think that the site is a closed shop so to speak, they see the regulars and feel that they may not fit in.
But we are gettign to know certain people and I have noticed some people only post when they have a report to make.
When some one asks about information on squid I direct them staight to this site because there is no other site like this one nor will there ever be
Squidfish is the place to visit if you want all the information and advise on Squidding and along with other members we have built something quiet unique as there is no other site like this in the world
I am sure that I and other members both old new and forthcoming will enjoy this site for many more years to come

Is the check in the mail LOL

Maybe a few squid jigs would be fair payment? haha

...which reminds me....I am going to run another competition soon. I still have a few jigs to give away...though they are mostly of the commercial style (i.e. not prawn shaped jigs).

Squidfish FAQ | Squidfish Rules
Back to Latest News and Announcements


0 user(s) are reading this topic