30 replies to this topic

Finally got out and went for a quick morning squid session, fished till 8.30am n left.

i was fishing the hacking, only managed 1 calamari around 12cm, and no more follow up. I wasnt feeling it in the area so i moved to open waters seeing the swell was only around a metre..

i managed another 3 southern calamari, 18cm,26cm,and 29cm being the biggest, all were very aggressive at attacking the jig but the 29cm really chewed into it n pulled a little drag. all caught on the jig colours below 1st one is a shimano sephia size 3.0 the 1 below it is a haramitsu 2.5 both have gold foils in yellowtail patterns.

as my fridge is full with squid, and these werent any PB's all were released to grow bigger.

Hahaha. Good to see you made your own thread for catches!

Wish i had caught that many calas i would be releasing them.. Freezer is full of arrows!

Still havent managed to land my own cala, so needless to say, im jealous!

leeding up to the october long weekend havent had much luck, just odd ones here n there.

fished coogee open waters with no avail, bit windy but swell was low.

fished the hacking with just odd calamari n a few arrows but no real size to em just around the 20s cm .

im hearing sydney harbour the passed week or so hasnt been good maybe all the warships n boat traffic ??? not sure anyone having luck??

on the other hand been hearing good reports on jewfish, there quite active atm and they have been good sizes to them..

Harbour turned orange and brown. Filthy conditions for a bit there!

i have been getting reports that the larger winter calamari are still here, but are very timid and the only way to entice them is to use a baited squid prongs with yellowtail as using a egi/prawn jig just does not intrest them.

so i tryed it last nite, but i kept the yellowtail alive on the sqewer and managed the 30cm cala, its not the way i like to fish for them, but just wanted to know if there still out there.

mon arvo 21/10 off the ocean rocks near maroubra/malabar .

fished the bottom of the tide, was pretty quiet

, but managed 2 calamari at 21cm and 23cm, was hoping for bigger in size but yeah a lil quiet.

both caught on 2.5 egi in green yellowtail type colour with gold foil. i did try a 2.5 egi pink in rainbow foil but no avail.

ps.seen 2 stingrays right underneath me, 1 was huge would of been easy 4 metres in diameter never seen a ray that big!!

Good to see the calas are still around. Was about to give up on em!

give up!! nnoooooo!  you cant give up on calamari.

calamari is like money, its the currency of the ocean, everything trades in squid

from the little pickers at ur local jetty to marlin & humpback whales.

so you need to visit ur local weed bed, invest some time in squiding and good jigs, hopefully its GFC (good fishing conditions

) and ur investment should pay off in a awesome meal. wether it be squid, jewfish, kingfish.

fished the hacking (bundeena, cronulla, lilli pilli )friday morning 1st nov, only 2 average size cala, they just werent firing, had a feeling they where eating on the second tide.

fished the second tide on sat 2nd managed 3 small calas in 10mins n gradually they kept coming in bagged a 8 , 2 were large arrows which had a lil weight n pull for arrows. fished lilli pilli later that nite nothing except baby calas at the jetty.

fished tues 6 water was very dirty, only manage 1 small cala, throw out a yellowtail on a spike mix it up coz of the dirty water, but didnt manage a strike. some mullet,yellowtail n garfish were also caught.

i think its time to head out to open waters to get some size.

Where abouts in Cronulla?

no squid this week, alot of rain. you might be better off chasing jewfish and large bream with dirty water atm.

got out monday nite, was blowing 20 odd knts n white capping in the bay. managed 4 calamari, 2 were small, and the other 2 where 18cm hoods.

also heard stories that theres still the odd larger winter calamari still getting around, about the 35cm +  hood size, within the last 2 weeks.

unfortunately i havent had such luck, maybe a boat might be the go to unfished weed beds

Went out to taren point( near cronulla) today. Got 3, what I believe are arrow squids? 15,18 and 20 cm hoods. Don't really know if this was a decent day in terms of squidding. I've only been squidding for 2-3 months now and only managed 8 arrow squid(I think) and a cuttlefish. So I'm very happy with 3 in a day.
Still let to catch a calamari but hopefully I can find some places that hold some.

Also got a nice stingray

3 is a nice catch, at least they werent too small.

fished the hacking sunday night (yesterday) was a great nite,was very nice conditions, everyone caught squid as they where just on the bite, with a few of high 20's hoods.

i caught 9 i kept 4 for a feed n let the rest go. got 1 good size arrow amongst all that southern calamari.

fished sydney harbour today, with it looking so promissing there just wasnt any squid atm, im sure they're there, and were feeding but wind was just too strong. if ur still going best bet would be rose bay n watsons bay to get out of the wind. double bay was dirty from stormwater n rushcutters is full of yachts for syd to hobart race. north side was no where really to  hide.

went out yesterday morning (27/12/13) chasing kingfish, so i fished inside for squid, i caught 0 but my younger brother caught 3 biggest was 35cm hood, blew me away, in a 40min session.

we then left to chase the kings, was quiet all morning and swell was bigger than the forecast predicted, but fished on.

as we were about to leave finally, my brother hooked up, hooked a really big kingfish and was fighting it with a full bent over rod,locked drag and the fish still pulled like it was a kmart kids rod.

he tryed to move to another rod to get a better vantage over the fish, but as he's trying hold the rod, the fish was pulling him in because he couldnt get a proper footing on the mossy rocks, its  kinda like water skiing on rocks but a fish pulling instead of a motorboat.

anyway landing a kingfish thats a metre and some long was always gona be a futile battle and the king busted him off at the inner reef.

fished this morning, on the high tide inside the bay, condition were ok, but the wind was shocking!

there was another decent size following 1 ive hooked but because of the wind i couldnt land the 1st one quick enuff to get my jig out 4 the 2nd squid, so that one is still at large.

ohh and the 36cm cala gave me a blasting of ink n got most of me and everything else around me.

i'll try n get some pics up very soon. 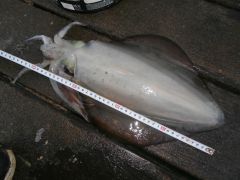 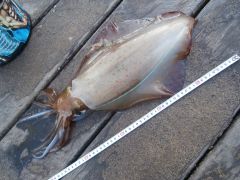 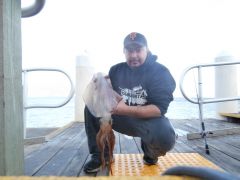 the last 2.5 weeks have tryed the harbour,bay,n the hacking, and its been very ordinary, guess its just that time of the year.

botany bay being the best out of the 3.