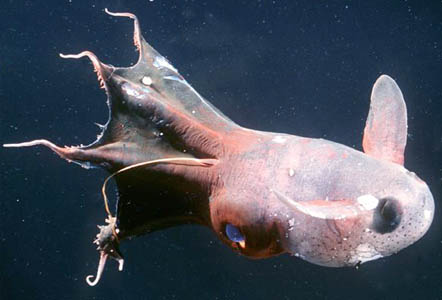 The vampire squid is rather small, reaching a maximum of 13 cm ML (Nesis, 1982/7) and is very gelatinous; its consistency is that of a jellyfish. It occupies meso- to bathypelagic depths throughout the tropical and temperate regions of the world's oceans. The second pair of arms is modified into retractile filaments that can extend to lengths well in excess of the total length of the animal and be retracted into pockets within the web. The filaments, presumably, have a sensory function. The vampire has black chromatophores with reddish-brown ones interspersed. These chromatophores, however, have lost the muscles that enable rapid color change in other coleoids and are probably incapable of changing shape. A few normal chromatophores associated with photophores are still present....

Back to Squid Research