30 replies to this topic

Finally had the chance to go for a flick, yesterday afternoon. The swell was down and set to stay 1metre or less most of this week so after reading squidanators report & a few others, about larger squid being outside on the ocean front i had to give it a go!

The wind was terrible, but the egi action was really hot!

i was there for around 45min, managed 10 southern cals, all were extremely aggressive at attacking the jig that my brand new yamashita jig was destroyed, by the end of it all it looked like a furry cloth ball with barbs at the end of it!

Most of the squid were in the high 20's biggest being 29cm hood, not big, but very angry,all but the 2 smaller ones pulled drag hard!!

the best session ive had for a few months now!!

my tips for this week:

if your after bigger squid, fish the ocean fronts this week, swells are small so u'll have a chance to get out there. it will also buy time as u wait for all that rain to clear up out of the bays, n rivers. im hearing reports all along sydneys coast from wollongong, eastern suburbs, northern beaches..

if your after arrows for bait size, atm rose bay has been hot, (but just keep n eye out for that oil slick, there was a large oil slick there  in the past week)

and the hacking, around lilli pilli  has had lot of arrows recently. 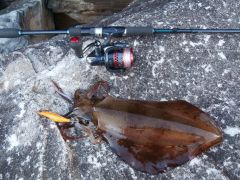 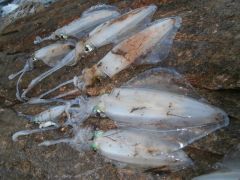 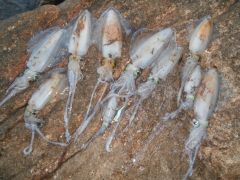 Nice catch! I have to get out soon, been busy studying.

not much to report, between work, terrible weather, big swells and being a bit sick, theres not much out there, getting the odd report of small arrows or odd calamari, but very hard fishing atm. i did get a report of a good size cuttlefish being caught that was well into the high 40's caught in open water.

other than that not much squid about.

most of the terrible weather has pasted, and the squid are back.

i've been fishing the hacking and sydney harbour, with very good results.

if your fishing outside or inside it doesnt really matter at the moment, but the larger winter squid are slowly moving into the bays/port/harbours, with a few catches in the low 30's and many just shy of the 30 cm mark.

1 very large model was lost by a amatuer, because of the drag not being set, i would of estimated it to be around the 40cm mark after watching it distort the rod and the big pulse it took to run. but i guess they the guy will live n learn from this experience and will always check his drag.

i'm also getting reports that few other guys have been getting a few in the high 20's low 30's around the hacking , and another man n son caught multiple arrows @ lilli pilli/wallys wharf at night mostly all bait sized.

pittwater has seen a few calamari's but mostly good average size, some bigger models around but you have to hunt for them. 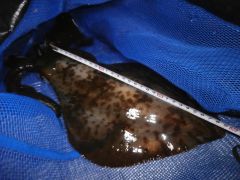 the last 4 weeks have been outstanding, all throughout sydney....

im getting reports from all over the place of great catches of southern calas.

there has been some big sizes caught, a 49cm @ lapa earlier in the month

if u are chasing the bigger models, try using bigger jigs.

At lapa aye? Every time I go there i get snagged :/ Nice to see the big winter squid come out! Hope to get a few. Have you ever used those squid jags? Where you put a yellowtail on and cast out?

yeh them squid spikes work very well for big squid, stick it through a yellowtail, try n keep him alive for much better results, put it under a float n let him drift around for a hour or so, u'll see the float bob up n down u'll know ur on.

alot of ppl from this site are now on sydney squid club facebook page, check it out dyl, if you havent already, i fink its bout 1200members n growning quick, u'll get a lot of info on there, rod n jig deals from tackle shops, locations, and a squid comp on the 21st of june 2014 i fink its at kurnell

Yeah, was out at balmoral wharf last night for no squid. Only 6 30+ cm yellowtail. They were huge. The squid just weren't around

disappointing really. Was at balmoral 2 weeks ago for 3 arrows in 15 minutes.

Really keen to try those squid jags, will try one next time I go. Thanks drift squid.
Ill check out that page, always looking for good info and more squid jigs

Hopefully I'll get my first calamari this winter

as of late there has been some descent size calamari caught all over sydney the last 2 months, if your willing to brave the cold weather. 30cm+ calas caught right from wollongong, botany, sydney harbour, northern beaches. the hacking have been smaller, but there is the odd big one cruising around, but they are extremely shy and wont take a jig or yellowtail spikes.

if u get a chance n conditions r good, get out there n give it a go..

anyone squiding, in and around sydney, south coast, and north of sydney.

where gona be in for a stella year, the abundance of bait fish this year from the warmer than usual waters,

have meant the squid have been eating like no tomorrow, as early as feb this year there have been large squid caught and are really fatter than normal.

even the past week, i have seen,(too shy to catch) larger than normal calamari starting to move in the bays/estuaries.

this time last year n year b4, they where 1 to 1.5 months later in the year when they preparing/started to spawn.

if your in to beat your PB, this is the year to do it by the looks of it.

atm if you wana try ur luck and if your after the big ones,

la pa has been good as well as wollongong being the best 2 spots right now,

the hacking is catching a few nice sizes mid to high 20's cm hoods, but lacking the larger ones atm,

pittwater and avoca are quite good as well, but you have to pick ur days with the wind, swell and weather.